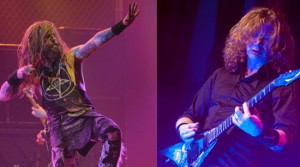 Rob Zombie will be joining Megadeth for a co-headliner in Switzerland at the Eishalle Wetzikon, on 28 June 2014. This adds to Zombie’s growing 2014 itinerary, which includes many mainland Europe dates, as well as several in Mexico. Megadeth and Zombie have previously appeared on a co-headliner tour back in 2012.