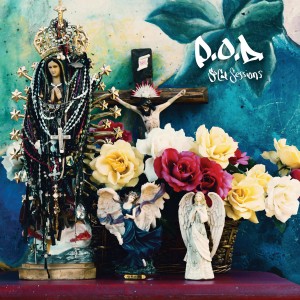 P.O.D.’s Sonny Sandoval (vocals), Marcos Curiel (guitar), Traa Daniels (bass), and Wuv Bernardo (drums) have also begun writing for their ninth studio album of all new original songs, to be released in 2015 by T-Boy/UMe. The band’s last studio album, Murdered Love, was released in 2012 and featured the Top 10 rock singles, “Beautiful” and “Lost in Forever.”

Since forming in 1992, P.O.D. has sold more than 12 million albums, including 1999’s platinum The Fundamental Elements of Southtown and 2001’s triple-platinum Satellite. The band has also garnered three GRAMMY® nominations, four No. 1 music videos, and more than a dozen rock radio hits, including “Southtown,” “Alive,” “Youth of the Nation,” and “Goodbye For Now.” As music trends have come and gone, P.O.D.’s fanbase, known as The Warriors, has only grown stronger.  The world-renowned band looks forward to sharing the next chapter in what has already been a storied career.