“Music comes down to passion,” says P.O.D. frontman Sonny Sandoval. “There are not a lot of bands out there today who have that. But I think that feeling is coming back around again.”

P.O.D. (Payable on Death) certainly has the right to talk about passion in music. Passion has been front and center since the band formed in 1992 in San Diego, CA, and all the way up to the release of their eighth and latest record, Murdered Love. Over the last two decades, the group has sold over 10 million albums (including 2001’s triple platinum record Satellite), garnered four No. 1 music videos, three Grammy nominations and over a dozen rock radio hits, including “Southtown,” “Alive,” “Youth of the Nation” and “Goodbye For Now.” Music trends have come and gone, but P.O.D.’s fanbase has seemingly only grown stronger.

Still, after the release of 2008’s When Angels & Serpents Dance, the band took a lengthy hiatus. “You can blame me,” says Sandoval. “The record business was changing, and we all wanted to get back to our personal lives and families. When we do P.O.D., we want to enjoy what we’re doing, and not to do it to pay the bills or tour just to tour.” Fortunately, the time off served the band, and Sandoval, well. “Yeah, I got in a good place again. P.O.D. means so much to us and our fans – there’s a lot of love for what we do. I wanted to keep inspiring and encouraging people.”

The band initially reconvened with a few jam sessions and the intent to put out a hardcore, Bad Brains-style EP and tour a little bit. But the initial recordings were strong enough to convince the group to tackle a new album. “By taking a break, we kind of got back on the same page,” says guitarist Marcos Curiel. “Now, everyone has the same attitude going forward, the same feeling we had when we did those first two first two big albums The Fundamental Elements of Southtown and Satellite.”

The most startling aspect of Murdered Love lies in its diversity and the band’s songwriting having penned every track on the album. The opener “Eyez” might be the band’s heaviest song yet, with a cameo by Hatebreed’s Jamey Jasta. It contrasts sharply with “West Coast Rock Steady,” a playful hip-hop ode to their San Diego roots featuring Sen Dog of Cypress Hill. Meanwhile, “Panic & Run” is full-tilt punk, “Bad Boy” brings a funky swagger and first single “Lost in Forever” ties it all together with an equal mix of aggressiveness and melody.

“The band is a fusion of all our musical passions,” says Curiel. “We can jump from punk to reggae to rap to metal. And funk — people forget we had a little funk on our first few indie releases. So on a few songs here, we took it back. The whole process was really organic.”

Lyrically, the record finds P.O.D. at its most thoughtful and introspective as the band contemplates their lives and the world around them.     On “Lost in Forever” Sandoval shows a mixture of hope and unease to questioning the cruelty of man, as the band also does in the brutal title track “Murdered Love.”  “It’s about people who have died when all they brought was love” explains Curiel.   The sparse, catchy “Beautiful,” contemplates the afterlife while the teeth-rattling album closer “I Am,” finds Sandoval opening with the vivid line: “I am the murderer, the pervert, sick to the core” and never lets up. It’s the band at its darkest and most confrontational.

“I had been doing a lot of outreach to kids, talking at a lot of schools,” says the singer. “I see what they go through – suicide, rape, addiction –and that song is just about being vulnerable and honest. They’re wondering if they’re screw-ups, if they’re deserving of love and compassion.

“The band recorded Murdered Love with Grammy-nominated producer Howard Benson (Kelly Clarkson, My Chemical Romance, Daughtry), a long-time friend of the group and the man behind three of its biggest records. “He’s family,” says Sandoval, then laughs. “He has the power to choose who he wants to work with, and I think he wanted to go back and make a real rock record.”

To promote the record, the band has already set up a late spring/early summer headlining tour, as well as hitting a number of festivals and larger shows this year. “It seems like there’s Warriors in every city,” says Curiel, noting the band’s affectionate nickname for their diehard fans. “They’re loyal. And it’s great, because we’ll see people who loved us around the Satellite era bringing their kids.” Given the closeness between the band and their fanbase, it’s no surprise that P.O.D.’s new logo was the result of an online contest with their fans.

In the end, Murdered Love showcases a band at its most energetic and vital, nearly two decades after its debut. Sandoval agrees.

“This is the best record we’ve ever done,” says the singer. “And that can only come from what we’ve put into this. We’re the same four down-to-earth guys we were when we were putting out indie records. There’s an honesty and an underdog vibe to everything we do that you can definitely hear in our music.” 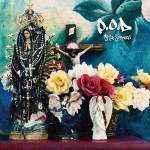