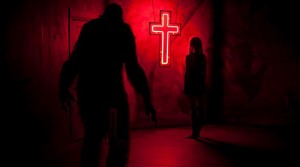 The Lords of Salem has topped a list of top horror movies of 2013, compiled by Sound on Sight. The online magazine calls Zombie’s 2013 movie his “most patient and mature film” and adds that “Salem is a textbook study on how to do horror right“.

Rock star-turned-director Rob Zombie has always been a controversial figure and perhaps the most polarizing director in modern horror. With The Lords of Salem, Zombie creates a suffocating sense of foreboding dread. Much like Ti West’s The Innkeepers, mood and atmosphere are his primary concerns. As the film progresses, things grow increasingly strange by the minute. Heidi’s nightmares recall the best of Alejandro Jodorowsky, and the surrealistic moments (specifically within the apartment) raise comparisons to early Polanski. But there’s no confusing his aesthetic with anyone else. With his latest, Zombie was given complete creative control, and the end result is a work of phantasmagorical cinema.  The Lords of Salem is Rob Zombie’s most patient and mature film. Salem is a textbook study on how to do horror right – largely bypassing gore until the climax and avoiding cheap “gotcha” scares that directors employ far too often. Salem is essentially a 70’s-style European art-house horror flick culminating with an air of ambiguity – a take-no-prisoners final act painted with moments of crazed inspirations, an old-school horror flick sporadically interested in experimental decor.